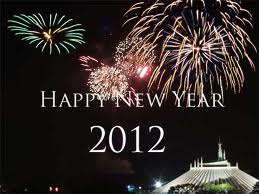 So, did you go to a New Years Party? Did you stay up and watch the ball drop on TV? Did you already break your New Years Resolution? Did you make a New Years Resolution?  What a year 2011 was and I hope that 2012 is just as much fun.  After all 2011 is the year that Hubby retired and we got August. I look forwarded to 2012 with all the joy of a little child on the first sunny day after several rain days. Bring it On!!
We went over some friends house for New Years Eve but didn't stay to watch the ball drop. We came home about 9pm, put on our Jammie's and I went to bed! Hubby woke me up at midnight to tell me that the new year was here, I mumbled something and I think I kissed him but continued to sleep. I know, I'm such a big party girl!!
Sunday the temps up here were 45! 45 Degrees, no snow on the ground, sunny!  By Tuesday, we are suppose to get up to 18!!! It's where I live folks. I'm just glad that we don't have snow to shovel yet but man or man it will get really cold.

Keeping August warm has not been a hard thing at all in these temperatures. He can handle the mid 40's just fine.  And the fact that I can sew, he has also been styling as well.  Here is his New Year Harness. 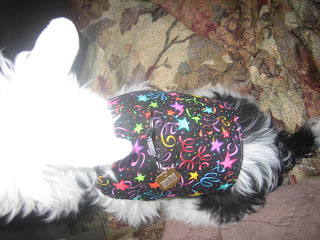 I also made him a little coat to go over it so he can stay warm as well.  He likes his harnes' now as they mean he is going to go out for a ride and out to walk.  He likes both of these activities so once he has it on, he stays close because we are going "By- by".  Here is his coat. 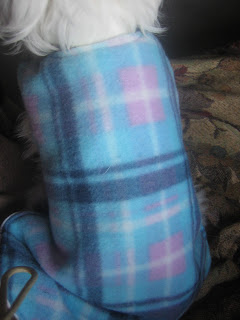 In fact, he has several coats and several harnesses that he wears. Most of his coats are reversible because if I'm going to sew it with a lining, why not make it reversible so he can wear it two ways.  Here is the other side of this coat.
I'll show you his other harnesses and coats as he wears them this month.
So how was your New Years? What did you do?
at 5:30 AM