I must have done something good!

There is a song in the Sound of Music called "Something Good" One of the lines says "Nothing comes from nothing. Nothing ever could. So somewhere in my youth or childhood. I must have done something good ."

That is how I feel about my life with my Hubby, Gerry.  We were married right out of high school. No one thought it would work out. We were too young, nothing in common, he was leaving for the Air Force and would never be faithfull. But we did it any way because we were best friends and we were in love.  So we started our lives, together.

It was not always easy, after all we are imperfect people living together. But Love and time  worked everything out.  After 40 years, we are still together and still in love and still best friends.

We started our celebration by taking the dogs up north to York Maine to walk around the beech.  Becke is a seasoned beech goer. She doesn't like to swim in the water but will walk along the edge with me and meet and greet people who can not resist how beautiful and calm she is.

August has never seen the ocean. He is small remember so he is afraid of a lot of things. We stopped along the way to York beech and let August see the ocean for the first time ever from a distance. 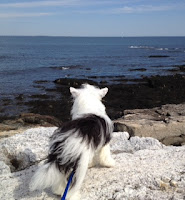 He loved seeing it and explored the rocks and sand but didn't have to go to the sea! Smart move on our part. 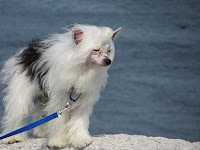 He enjoyed the wind in his face and smelling the sea air. So when we got to the ocean, he was ready! 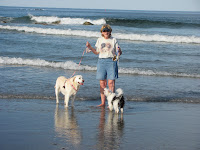 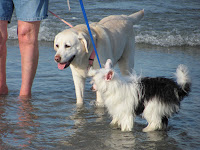 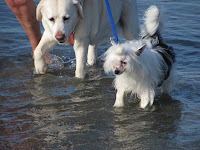 With his big sister close by, August braved the cold water and splashed in the water a bit. 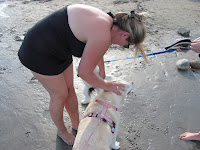 His big sister gave him the courage to go up to people and meet and greet and when he didn't want to meet someone, big sister stood between him and the person, allowing herself to be petted instead of him. August didn't bark at people or stuff or anything!  That is HUGE to those of us who know August and how timid he can be.

Sunday, the fun continued with lunch out at the Copper Door and then with our small group who gave us an ice cream cake that I would have taken a picture of but we ate it so fast that there was nothing left, it was that good!
Happy Anniversary to us and may we be blessed with 40 more!!