How was your weekend?  Did you do some Christmas shopping, or maybe some decorating, or maybe you spent the weekend baking?  It always amazes me how fast it goes by and before I know it, it's Monday again. Friday night we finished taking down all the fall decorations and getting up the Christmas ones that we are putting up this year. We are scaling back a lot to accommodate the puppy.

I spent Saturday doing all the usual stuff, cleaning, grocery shopping, you know, all the stuff you all did as well.  I also worked a bit on our front yard. The leaves still have not been raked and so I started to put a dent in it. I hope to have it done before we get snow.  We have rain coming Tuesday.

Sunday, we had a great worship service in the morning, grand kids in the afternoon and a great small group study at night. In between I made a play coat for August. He is growing so fast that it doesn't a lot of sense to keep buying him new coats. So I made one while he played on the floor next to me. 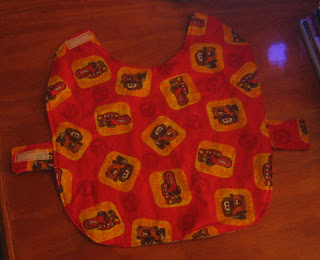 Oh, I did have one thing happen to me, I took the dogs out early Saturday morning and while they were out there I head a Coyote!  It was really, really close to so I ran down the stairs with a flashlight! Now there's protection for you!  I guess I thought that if I flashed the light in the eyes of the coyote that I could   scare it off and get the dogs back inside. Not a great plan mind you as I thought about it later.  As it turned out, I was able to scoop August up and Becke and I ran up the stairs and back into the house.  It was not in our yard, it was on the other side of the fence. Still the sound of a coyote is very unnerving and I hope I don't hear one that close to me ever again!
See just a normal weekend around here. So how was your weekend?