1. What news story are you following right now?
Since our son and his family live out in San Diego, I've been following the weather channel and the fires out there.

2. What's the last thing you wanted but didn't get?
Well I live a spoiled life because there is nothing that I can think of that I didn't get.  Hubby takes very good care of me and I have whatever I want or need.  I know that I am blessed.  If it were possible for my son and his family to live closer to us that would be divine.

3. May 28th is National Hamburger Day...when did you last have a hamburger? Other than your own kitchen or BBQ grill, where is your favorite place to go for a hamburger? And for all you non-meat eaters out there...when you're invited to a cookout what is the one side dish you hope is on the menu?
I had a hamburger on Monday. Hubby cooked some BBQ pork ribs and hamburgers on the gas grill and he added a touch of BBQ sauce to the burgers. It was delish. He is a great cook.

4. How have your priorities changed over time?
Since being diagnosed with cancer I don't care as much about the small stuff, you know, dishes in the sink, or laundry not folded right away.

5. What's a favorite memory with your grandparents?
My maternal grandmother lived across the street from a bakery. A person could buy a loaf of bread that was not cooked yet and you could put it in your oven and bake it.  When asked if it was home made, she would say "Well it came out of my oven, so yes."  We ate at her house after church often.  She was a good cook.

6. On a scale of 1-10 (with 10 being fantastic!), how good are you at multitasking? Share an example.
10!! I'm a woman after all!  I can take a bath while talking on the phone, get dressed and apply make up  and start cooking a meal all without the person knowing anything.

7. How would you summarize your highs and lows for the month of May?
My highs would be sitting out front with Hubby on the faux patio that Hubby and I made with beautiful flowers all around us.  Just holding hands, sitting there and enjoying watching life go by was my high.  My low would be that a transplant may be in our future sooner, rather than later.  Yuck to transplant.

8.  Insert your own random thought here.
We had the chance to watch our grand girls on Tuesday.  They are  5 and 3 years old.  Watching them color with crayons was so much fun. The little one would declare "I need a green one." and the older one would hand her a green crayon.  They share so well, and they play together so well.  I am so proud of the children they are and how our daughter is such a great mom.  How did she become such a great person with me as her mom?   I'm impressed by her.

What a week this has been!! Playing with grand girls, gardening, cleaning, showing hospitality to a house guest and life in general.  Thank goodnes my Hubby loves me and copied the questions for me.  Come play along with us, won't you?

1. Under what circumstances do you do your best thinking?
Early in the morning after a really good nights sleep.  I seem to be clear headed and make much better choices then.  As the day goes on, my head just becomes too full of information and my thinking skills just goes down hill.

2. Are you a risk taker? What's one big risk you've taken?
No not really.  I like to play it safe.

3. Some of the most common phobias according to the National Institute for Mental Health are-fear of spiders (arachnaphobia), snakes (ophidiophobia), heights (acrophobia), fear of spaces from which escape is difficult (agoraphobia), fear of thunder and lightening (astrophobia), fear of dogs (cynophobia), injections (trypanophobia), social situations, flying (pteromerhanophobia) and fear of germs and dirt (mysophobia). True phobias affect only about 10% of adults, but of those listed which would you rate as your greatest fear?
WOW! As I read the list my brain was going "Yup, yup, yup"  Holy cow!  I guess my greatest fear is  is flying and heights which really go together don't they. After all one is pretty high when one is flying right?
4. Are you settled or do you feel the need to move somewhere new?
I would like to move again.  Don't get me wrong, I like the town we live in and being in the country but I would like to be closer to the grand girls and on one floor.  It makes walking better on these old bones. We could still be in the country and still be closer to the girls.

5. What is something you find annoying when dining in a restaurant?
Over tired kids that really need to be home and in bed instead of out so late eating dinner.  I feel bad for the parents, but really people, take that poor tired child home and put him/her to bed. They don't care about eating out, they want to sleep! 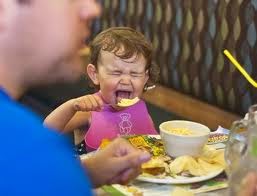 Sunset orange for sure.

7. If you were going to take a holiday all by yourself, where would you go?
In the woods, in a log cabin, by a pond, lake or some other water source.

8.  Insert your own random thought here.
This week, Thursday in fact, we are back at the doctor's to see if I'm still in remission.  I test every month and although I try not to think about cancer it's hard when every month I have to test and then wait for the results.  I am growing hair, it's blond!! It's short - oh my is it short - but it's growing.  The doctor thinks it will grow at the rate it did when I was a baby so I'll need a hair cut July 2016!!!

TOO POOPED TO POP HODGEPODGE!

Thank you Joyce for coming up with the questions and thank you Hubby for copying them for me.  It's been a long week and I'm tired.

1. It's still May, right? When were you last in the middle of something that might be described as mayhem?
We had our granddaughters over on Tuesday and played and played.  Ever see two girls 5 and 3 years old and not see mayhem as well?  Me neither.

2. When did you last feel dismayed?
I can't think of a time recently when I felt dismayed, I guess it would have to be when my doctor told us I had a incurable cancer. That was pretty dismaying.

3. What's a food combination you like, but other people may find strange?
Moxie tonic and vanilla ice cream.  I love Moxie but most people don't know what it is as it's a New England thing.

5. US News and World Report listed the best historic destinations in the US as follows-Washington D.C, Philadelphia PA, Williamsburg VA, Charleston SC, Boston MA, Richmnd VA, Savannah, GA, Santa Fe NM, Yellowstone, San Antonio TX, San Francisco CA, New Orleans LA, and Charlottesville VA.
Of those listed how many have you seen in person? Which two sites on the list would you most like to see in person?
I've been to Washington D.C., Philadelphia PA, Charleston SC, Boston MA Santa Fe NM, and New Orleans LA. I would like to see Yellowstone and San Antonio TX.

6. May is National Physical Fitness and Sports Month. If you had to participate in a single fitness activity for the next half hour, which activity would you choose?
Playing with a 5 and 3 year old! Best work out anyone can ever have.

7. What did you like best about the city, town, or neighborhood where you grew up?
I grew up right across the street from a ball field.  It was a huge field where in the winter time there was an ice skating rink, in the summer you could play baseball, football, and soccer all at the same time!  It was bordered on 2 sides by woods where the best ghost stories were told and many forts were built.  It was elevated so in the winter we would use our "flying saucers" and slide down the side of it and across the street and end up in our driveway.  It was a blast!

8.  Insert your own random thought here.
New Hampshire has lost another police officer this week. He was called to a home and was shot shortly after her got there.  He leaves behind a wife and 2 teen aged girls.  It's a sad day around here.  Our police officers run into danger all the time knowing full well that they may not go home.  If you see a police officer today, thank them and say a prayer for them to be able to go home today.
at 11:15 AM 7 comments: