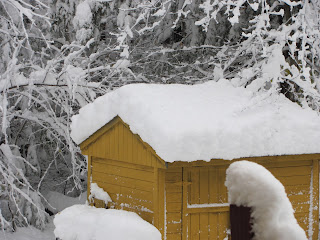 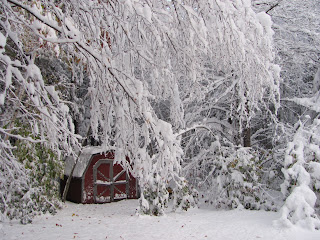 Snow in October is not unusual but this much of the wet white stuff sure is. The trees still have leaves on them so when the added weight of snow was placed on top, it was too much for the poor things. They snapped. And with them came down the cable, internet, heat...everything electric including some cell phone towers making service spotty in some places. 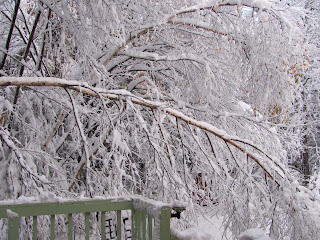 Several hours later the sun was out, the trees were dropping the snow onto the ground but the damage was done. We were without power for 95 hours total. 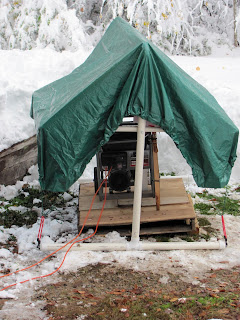 We worked together to get the generator up and running and plugging things into it. We talked about how warm the pellet stove was keeping the house. 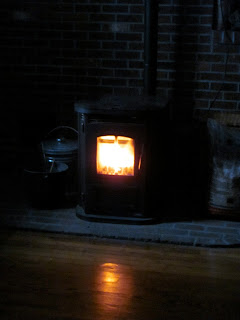 We talked about things that has happened to us before and we slept a lot. We lit the kerosene lamps at dusk and blew them out at dawn. We ate well because we could still cook. We drove around to charge our cell phones and collect water to flush (we have a well and couldn't hook up the well to the generator). We had our evacuation supplies and were ready for the hours to pass. And they passed slowly. It was nice to see people checking in with each other. The roads were clear, just no one had power. The traffic lights were out, the small hardware stores were closed either because the store had no power or the people who own it had no power and several roads were closed and so they couldn't get to the store, and several gas stations were closed as well, making it hard to get gas for the generators.
Here are some more pictures of what we had to deal with.
I'm glad it's over and that most of the snow is gone! But for those 95 hours, it was pretty hard- good thing Hubby and I enjoy each other's company.
at 5:30 AM

Email ThisBlogThis!Share to TwitterShare to FacebookShare to Pinterest
Labels: Fall