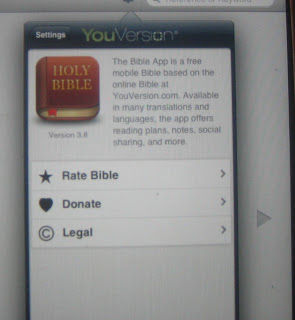 Our Sunday Night Small Group has been studying the book of coffee makers - He-brews.  That is just a joke among the small group since as soon as we get together, the coffee is flowing.
Anyhow, we were in Hebrews Chapter 11 this past Sunday night we only got the first 4 verses done!

Something hit us all!
Like it was NEVER in the bible before.

It must have just been put in there we thought.

By faith Abel offered a more acceptable sacrifice to God than Cain did, for which he was commended as righteous. God commended him by accepting his gifts. And through his faith, though he died, he still speaks. (Hebrews 11: 4.)

Adam and Eve had a face to face relationship with God. They only had to obey one rule "Leave the Tree Alone".

Genesis 2:16 "And the LORD God commanded them saying,You may surely eat from every tree of the garden, but of the tree of the knowledge of good and evil you shall not eat, for in the day you eat of it you shall surely die." (ESV) They didn't have the faith to carry that through. They didn't believe God had their best interest in mind.

Cain and Able had a relationship with God because they knew what sacrifices were acceptable. Able  offered the acceptable sacrifice and Cain did not.

How often do I think "If only I could have a face to face discussion with God, then I would have more faith." It will not happen!! It didn't work for Adam and Eve, and it didn't work for Cain and Abel. It is just not true!! I can have a strong relationship with God without the benefit of ever touching him or seeing him face to face. I can, because I choose to!

Lucifer, a premier angel, had a face to face relationship with God but he didn't have the faith to know that God was in control. He became proud, tried to usurp God and was tossed out of heaven and thrown down to the earth, and many like minded angels were thrown down with him. Rev 12: 9 (ESV)

I used to believe this lie. Why did I believe this lie?  Because Satan is the father of lies.  John 8:44 records Jesus speaking about the devil "You are of your father the devil, and your will is to do your father's desires. He was a murderer from the beginning, and has nothing to do with the truth. because there is no truth in him. When he lies, he speaks out of his own character, for he is a liar and THE FATHER OF LIES.  (ESV).

What I must remember is Ephesians 6:12 which tells us "For we do not wrestle against flesh and blood. but against the rulers, against the authorities, against the cosmic powers over this present darkness, against the spiritual forces of evil in the heavenly places." (ESV)

Email ThisBlogThis!Share to TwitterShare to FacebookShare to Pinterest
Labels: Blessings, Reaching towards Heaven