Just About Anyone Can Be A Father, Right? 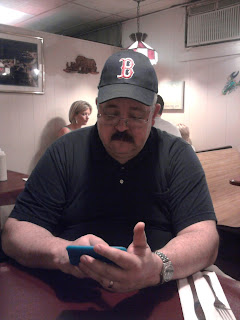 After all, it only takes sperm and once the deed is done then, it's done right?
Well maybe, but it takes a lot more to be a DAD

Dads, hold your hand and make you smile while you are giving birth to their children.
Dads, call all the far away relatives and tell them the good news and even defend the baby from comments like:"WOW he big (as in fat)!" with "Not at all, he's perfect!"
Dads, clean the house so when you and the baby come home,it's ready for you.
Dads, help change diapers and not just the wet one either!!!
Dads, take pictures - boring everyone at work them.
Dads, talk about every thing the baby does "Little baby rolled over today, you should have seen him!"
Dads, take the 2 am feeding or diaper change.
Dads, sit up with sick toddler and read "Good Night Moon" for the 100th time.
Dads, take you to the doctor while Mom is home sick or taking care of the other child.
Dads, put lotion on Chicken pocks on girls with his eyes closed so he will see the "girly parts".
Dads, sleep in uncomfortable chairs while son is sleeping in a hospital bed because he broke his arm in 2 places and needed to spend the night.
Dads, break out is smiles as the his little girl climes a 15 foot tree, in a dress and says "That's My Girl"
Dads, join TaeKwonDo classes with his son so they can do it together. And stick with it!! Both becoming Black Belts.
Dads, take there family to church and teach them about the love of God.
Dads, sit up night while the kids are out on dates waiting for them to come home safe and sound.
Dads, make the boys comes in to meet him before being allowed to take HIS daughter out for the evening.
Dads, cancel dates with boys who drive up and honk the horn for HIS daughter to come out. (Dad went out, Daughter didn't).
Dads, have the "bird and the bees" talk without  blushing.
Dads, cry when his son goes off to college
Dads, cry when his daughter moves out of the house to live on her own.
Dads, go to the restaurant where daughter works and leaves a huge tip because she is his little girl.
Dads, show up in a snow storm at the restaurant and follows daughter home, in case her car breaks down or she gets into an accident.


Dads, teach his children what it means to love one woman (their mother) with all his heart.
Dads, teach his children what those wedding vows mean.
Dads, get asked to be best man at sons wedding and does so with grace and pride.
Dads, beam with pride when he holds his grand children for the first time, and every time after that wondering what he did to deserve such joy as grand children.
Dads, push a pink stroller around (carring the "blankey") for HIS granddaughter while the said granddaughter is running around playing.
Dads, do all this and more, but then this post would be WAY TO LONG TO READ.

YUP, Being a father is easy, Being a DAD takes a lifetime.
So Happy DAD's day to my husband who has proven just what it takes to be a DAD.
I love you so much Honey. 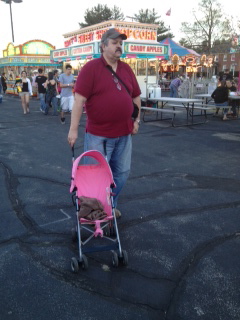 Treat you DAD special this weekend, they deserve it!