I thought it would be fun to spend a few days looking at our town and you can tell me about your town. 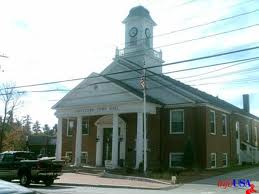 Hubby and I live in Goffstown, NH. The Census back in 2010 reported a population of 17,651.   Goffstown also includes 2 villages, Grasmere and Pinardville which are included in that total number.  Although the town is small it does include Saint Anselm College (and its New Hampshire Institute of Politics) and the New Hampshire State Prison for Women.
It was named after Colonel John Goffe in 1761. Before that the community had other names: Narragansett No. 4(1734), Shovestown, and Piscataquog Village before it became Goffstown. The entire town is 37.5 square miles large! Not very big at all. 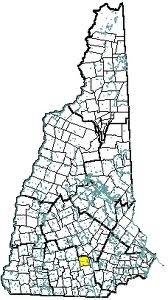 According to Wikipedia, Goffstown (that little yellow square) is located in the eastern part of Hillsborough County, directly to the west of Manchester, the state's largest city. Concord, the state capital, lies 16 miles (26 km) to the north. The town center is on the Piscataquog River near the western boundary of the town, around the intersection of New Hampshire Routes 13 and 114. The village of Grasmere is located in the eastern part of town, and the neighborhood of Pinardville is located in the southeast corner of the town, essentially forming a continuous development with the adjoining city of Manchester. Like I say it’s the upper right hand corner of the USA.

We have 1 kindergarten, two first through fourth grade elementary schools, 1 Middle School that serves Goffstown students in fifth through eighth grade and it also serves 2 smaller nearby towns for grades seven and eight. 1 High School for not only Goffstown but the same 2 small towns as well. There is also 1 Catholic independent school that serves pre-Kindergarten through 8th grade.