I really don't know how Joyce's does it, but every week she comes up with the questions that we all answer. Thank you Joyce and you all can join in the fun too. Click the button and join in there, or answer here.
1. What is something that bothers you if it is not done perfectly?

I want the towels folded only one way so I have to do it.  I have no idea why it bothers me if they are folded differently but it does so I fold them and the sheets.  I really only want them folded one way. Weird huh?


2. What is one of your best childhood memories?
My Grannie (dad's mom) was a very short woman. I don't think she was even 5 feet tall. She never cut her hair but always wore it in a tight bun on top of her head. So one day, she was watching my sister and I and she fell asleep on the couch so my sister and I took her hair down to see how long it was.  She woke up and starting laughing as all this hair came tumbling down. She stood up and although she was under 5 feet tall, her hair came down below her butt.  So it was really long!  She though it was funny and we had a good laugh over it.   My sister and I had really short hair and never saw so much hair on a person!


3. Do you plan to watch the Royal Wedding and when was the last time you wore a hat?
Well I have to work on Friday so I will most likely watch it before I go to work so I will miss the actual wedding at 11 am. It will be on the news later, so I will watch it later.   I don't remember the last time I wore a hat. I really don't wear them at all. I don't have a "hat face".


4. Where do you fall in the birth order in your family? Do you think this has influenced your personality?
I'm the youngest of 3.  The baby. The last one. I don't know if it influenced my personality.  I do believe that my personality was formed more by the way I was treated rather than my birth order.


6. When you need to confront someone would you rather communicate in person, on the phone, by email or by letter? Why?
If I can, I will confront in person. It's only fair I feel to do so in person.  I have confronted someone in a letter when distance was great. I don't think I've ever do so by email - that seems too impersonal.  I also don't think I've do so on the phone.  That too seems pretty impersonal.


7. Dodge ball, freeze tag, kickball or jump rope? You have to pick one.
Have to pick one!!! I pick freeze tag. I like to see the poses the others have to hold until they are un-frozen, some of them can be funny.


8. Insert your own random thought here. 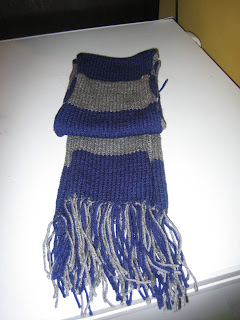 This is the scarf that I made to wear to the newest Harry Potter movie - the Final Harry Potter Movie.  I'm so excited. I'm in the house of RavenClaw you know.  Are you going to see the new/last movie?
at 6:00 AM