Polar Night: A New Novel by a New Author 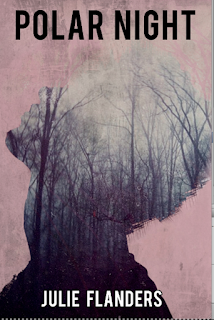 I've been following Julie Flanders on her blog Julie Flanders for a long time. She is an animal lover who was writing for local animal shelters when I first ran across her and her blog.  I've been stalking following her ever since.  She has a drive that I love!  She would blog about becoming an author and wanting to tell her stories.

Here is a little blurb about her novel to wet your whistle:
When Detective Danny Fitzpatrick leaves his hometown of Chicago and moves to Fairbanks, Alaska, he wants nothing more than to escape the violence and heartbreak that left his life in pieces. Numbed by alcohol and the frozen temperatures of an Alaskan winter, Danny is content with a dead-end job investigating Fairbanks' cold cases. That all changes when a pretty blond woman goes missing on the winter solstice, and Danny stumbles upon some surprising connections between her disappearance and that of another Fairbanks woman three years earlier. Forced out of his lethargy, Danny sets out to both find the missing woman and solve his own cold case.

The investigation points Danny towards Aleksei Nechayev, the handsome and charming proprietor of an old asylum turned haunted tourist attraction in the Arctic town of Coldfoot. As he tries to find a link between Nechayev and his case, Danny's instinct tells him that Nechayev is much more than what he seems.

Danny has no idea that Nechayev is hiding a secret that is much more horrifying than anything he could ever have imagined. As his obsession with finding the missing women grows, Danny finds his own life in danger. And when the truth is finally revealed, the world as he knows it will never be the same.

Want to know about Julie?
Julie Flanders is a librarian and a freelance writer who has written for both online and print publications. She is an avid animal lover and shares her home in Cincinnati, Ohio with her dog and cat. Polar Night, a suspense thriller with a supernatural twist, is her first novel. It will be published by Ink Smith Publishing on February 7, 2013. Find Julie online at her blog, on Twitter, and on Facebook.

Julie - I am so proud of you. I love people who face challenges with grace and in your case--win!!! You are a winner for sure.