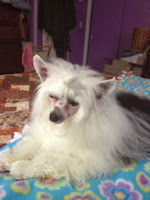 It was after 1:00 pm before we were ready to run again in another game called "Standard."

While waiting our turn, we (And by "we" I mean August) visited without barking, walked around outside, watched the other dogs run, and even took a nap on my lap!  He was polite, calm, even looked bored at one point.  No stress at all.

In this game, the object is to run a full course of numbered obstacles in order, going over the obstacles in the correct direction as well.  The handler gets to walk the course without the dog so that we can see where the obstacles are, what direction they go and to plan how to get the dog from 1 to 2 to 3 and so on in the shortest possible way at the fastest speed/shortest time that the handler and dog can do it in. Sounds easy right, not so much as I've learned.

We had 13 obstacles. We made no errors (mistakes like knocking down a bar, going over time, or running the wrong direction - yes that happens.). We had fun. We didn't have barking, or freezing, but we did have a slow time as he would turn around and look at the onlookers watching him. We also had the final jump that he first ran past, then tried to jump over it going the wrong way!! I was able to slow him down, get him to come back to me and go over the jump in the correct direction.! Then I exhaled.

In the end, he did qualify and came in 4th place.  I was stunned as they handed me a ribbon!  Yes a real ribbon that says 4th place on it.  He did it!

My cheerleaders included Hubby and big sister Becke this time (Hubby had a meeting for church in the earlier run).   It was pure fun.
at 5:30 AM