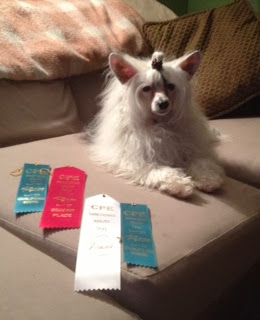 In the end we had entered 3 games and qualified (Q'd) in 2 of them.The more Q's we get the faster we can move up to Level 2.  He had held his own, even running with Paula. He had met new people and new dogs. He had showed more confidence than I ever saw before. He had done more than I had hoped for and way more than I expected.

At one point we took both dogs out for a walk and the Judge was out there, walking her own dog. she looked at me said "What a great dog, it's so much fun watching him run and we all can see just how much fun he is having."  I started to cry. She had no idea what it took to get us all to this day.  No idea how many classes - how many times we worked in the corner of a class, on not barking. No idea just how fearful he was in the past of the Wicket, the people, the other dogs. All she saw was a confident dog having a blast in a agility sport. I cried tears of joys, tears of relief, tears of pride.  It all hit me at once and she had no idea!

Sunday was a day of rest.

I use to do dog therapy with Becke, and had mentored others getting started in dog therapy and told them once the therapy session was over, go home and let the dog unwind.  I followed my advice this time as well.  Becke was tired, Hubby was tired, and I was beyond tired. We went home had our supper and was asleep on the couch by 6:30.  I had the good sense to put chicken in the cock pot so we came home to dinner waiting for us!  Added Mac and Cheese and we were ready with dinner in no time.

We spent the day relaxing.  We went to church and let the dogs sleep. Had a good lunch and all took a nap.  We needed the rest. Becke is 13 years 10  1/2 months old, recovery took longer for her than I had expected. her Saturday was longer than usual, her lunch was not the same and her nap was lost watching her little brother for the afternoon. August was just worn out and hubby and I just really needed down time.

In the end I learned that goals are important. Both for our pets and for ourselves.  As we move forwarded with Cancer treatments and with agility  training we reach higher and higher, digging deeper and deeper and in the end come out winners!