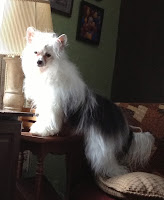 Saturday, November 9th, August and I had entered our very first Agility Trial. It has taken us a year and a half to get to this point.  It's been a long road. August is our Powder Puff Chinese Crested and he is 11 inches tall and 10 pounds.  He's a small dog that is not very confident. When he faces things that he is unsure of, he can bark, back up, hide and shut down.

Agility can help build confidence in dogs and for him, it's been wonderful.
If you've ever watched Animal Planet then you've seen the obstacle course that dogs run and jump over, on, run through, or weave around.  It's a fun sport and I was looking forward to giving it a try but August just couldn't do it....Until November 9th.

There are many different agility organizations out there. We joined CPE (Canine Performance Events).  Why? Well frankly it was because the other students in my agility class were in CPE and I wanted the company.  They understood the rules. They understood the way they worked and their dogs would be in the same trial as me so I had a built in support system. I'm no fool!

Since we are "newbies" we start at Level 1 but many of the people at the trial were at much higher levels (5's and C's are the highest levels in CPE) so we have a very long way to go. 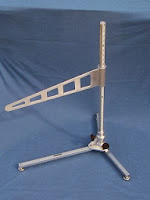 But before we get to run in the trial, August had to be measured - hence the photo above.

It's call the "Wicket" and the dog has to straddle the bottom bar while the top bar is lowered onto the dogs back to measure the dog from the shoulders.  The bar is pushed down on the shoulders just to make sure that the dog is getting measured and not all the hair that the dog has.  August has a lot of hair so he had to stand under this thing, while a strainge person pushed the top metal bar down on his shoulders to make sure he is short enough to jump 8 inches.

August hates the wicket!  I would take it out during class and he would walk around it but wanted nothing to do with walking under it!! As soon as I would lift that bar, he would run away!  So it took weeks and weeks of work getting him use to that device. Over time, he did get use to it as long as it was lightly placed on his shoulders.

On Saturday, they had the wicket on a table, so now August not only has to stand under it but he has to stand on a table under it while a strange woman measures him.  Measuring dogs was at 7:15am. The thought occurred to me that there would be nothing like ending the day before it begins because if he will not allow himself to measured, he cannot run in the trial. This may be one short day.

I knew we could use food for this so I had boiled chicken with me.  I got the food out and set him on the table. I told the judge that he was not very sure about this thing.  She was so kind and said "We'll go slow."  We started out with him facing her but he wasn't going to have any of that and turned around and put his butt in her face. I got him to straddle that bottom bar (praying "Don't have gas, don't have gas.) She then lowered the bar and pushed on his shoulders. My eyes grew as he began to lay down under the pressure and that is when I pulled out the chicken and held it over his face and he stood up to get the chicken.  She got his measurements, told me he was good to jump at 8 inches and let us go.

He would not actually run in this first trial until 10:20am. We had a long time to do nothing.
More tomorrow because we didn't do just NOTHING, we did SOMETHING.
at 5:30 AM