This is the last week of a Hodgepodge in the double digits, next week we will be in the Triple Digits!  Oh my.  So let's get this going. Click on the button to join the fun over at Joyce's blog or answer them here.

1. So, do you like beer?
No. I don't drink at all. My dad was an alcoholic and I saw first hand what an alcoholic can do to a family. I made a very conscious desision to not have it in my family.

Picking up after the dogs. It's just Yucky especially in the winter when it's frozen to the snow. However, it must be done-often. If only I could teach them this!!!

3. When was the last time you rode a bus? Where was it headed? 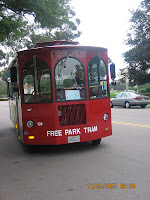 This was in San Diego, CA, when our youngest grandson was born. We went on this tram/bus thing all over the park. It was great fun sight seeing on this when we weren't hugging our grand sons of course. This grandson will be 5 years old this November.  Where does the time go???

4. What song from your childhood or from your own children's childhood could make a parent's nerves stand on end?

The Wheels On the Bus!  Really, it would drive me nuts to sing this with the kids.

5. The US Presidential election cycle is drawing to a close (can I get an AMEN??), and the third and final debate was held last night...what was the last thing you 'debated about'?
My last debate was with my husband and the fact that he has not had a hearing test EVER! And I think he needs one because I think he is hard of hearing and since he didn't hear the debate, he lost right?

6. Can a person make too much money? How much is too much?
A person can make anything they want as long as someone is willing to pay that price. This is a free country. I may not agree that baseball players are worthy of such large sums of money, but if the team is willing to pay it then I say "Go for it". I can live on a lot less so I don't know how much is too much after all we see people all the time spending money on what to me seems really stupid things. Does anyone else remember the toast with an image of Jesus in it and it sold for how much??? But again, as long as someone is willing to spend that amount, then go for it.  I may not agree, but I will never stop you from earning or spending your money.

7. Pop-soda-coke-something else...what's it called where you live?
Tonic and also soda. Both names up here mean the same thing.


8. Insert your own random thought here. 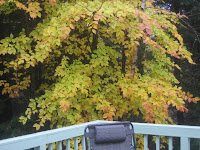 I am SOOO enjoying the fall colors here during the day and the smell of a fire at night. I love curling up in a warm bed and drifting off to dream land. Life is good people-Life is good!

Now it's your turn. Answer the questions and let's learn about each other.
at 5:00 AM