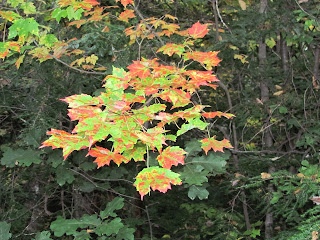 I hope your weekend was full of love, laughter, family, and friends. Around here I got it all!
Saturday I started the day getting my flu shot. Have you had yours yet?  In fact I got the Pneumonia/Flu shot that is good for 5 years!  It was one shot only and the Dartmouth Hitchcock clinic in our area had a flu shot clinic. The line was very long-but it moved fast. There was a line for adults and about 15 people giving out the shots and then there was a child line. I was in and out in under 20 minutes.

Then later that day I had the privilege of getting together with some co-workers for a Harry Potter Party! One of the co-workers has never seen the movies so for the past 4 years, there has been a Harry Potter Party and one of the movies has been shown. They are played in order so this year it was the Goblet of Fire. That is one of my favorites and as luck would have it, I was able to attend. 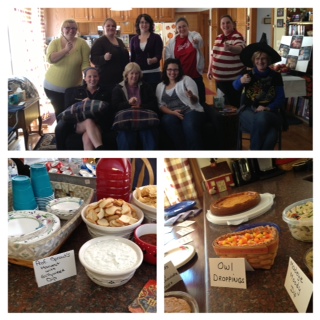 Here is the group of us and of course when we get together, there is food. In this case Hogwarts food!  It was funny and great. One of the ladies made us all wands!  Can you see in the photo below with them all. And of course, what would a Harry Potter Party be without the Marauder's Map that the hostess got when she went to Hogwarts at Disney!  Oh my, it is gorgeous. 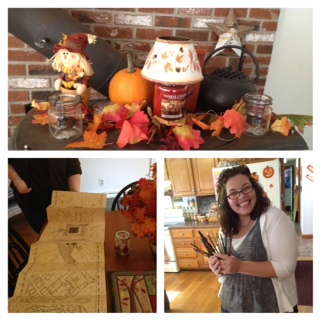 Later that night, my arm was hurting a bit and I figured it was a side effect of the shot. Since I was worn out, I went to bed early. I didn't sleep very well however, because every time I rolled onto that arm, the pain woke me up.
By morning, I was one yucky feeling lady. The flu shot did give me a mild case of the flu. I stayed home from church, bundled up under a quilt, with the pellet stove going, and the house at 78 degrees, resting.  I was very glad that both dogs were willing to just hang out and sleep most of the day.  Hubby got me things to drink, cold things to drink as my voice sounded really sore and my throat was feeling scratchy.
I did get to watch history being made. Did you see it? Were you watching it live?
I'm talking about Felix Baumgartner's Historic jump from the edge of space! 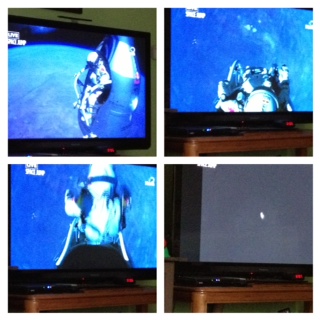 That little dot in the lower right is him free falling from over 128,000 feet (something like 24 miles)

Watching this brought back the feeling I would get watching the space ships take off from Cape Canaveral. They used to show it live, and all the tv channels would carry it and everything would stop so that people could watch it.  I remember being in school and the teachers would gather us in the rooms that had aTV in them and we would sit on the floor to watch the brave men who walked out of the hanger and into the space crafts. We all then held our breath while we counted down the final 10 seconds and then prayed as the ship took off.  Watching this record breaking sky dive brought back this feeling. How much training did this take? What creativity to even think of doing this. 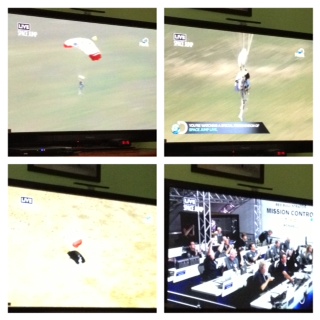 The man who was part of his team was Joe Kettinger, now 85 years old. He had set the record in the past (1960) that Felix was to break today. Joe was the only person talking to Felix up in the capsule that he was in. For me, it was amazing to watch and I'm so glad I got to watch it on live TV.

So, for Monday, I am working from home and taking my MucinexD and hoping this bug leaves me fast because I was told to get the flu shot and I did, and now I have a mild case of it. I guess that is better than having a full blown flu but man is this wearing me out.  Stay healthy my blogging friends and get your flu shot. Hubby got his and didn't get a reaction like I did so you all may be just fine getting it.  Talk to you all soon.