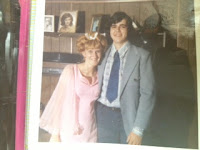 When hubby and I got married, I knew he was going to be cop so guns were going to be part of our life. We didn't have guns growing up and no member or our family were hunters so when hubby brought guns into the house it was time to get use to them

At first it was just his guns, I would watch him clean them and see how many parts they come apart into, that was a surprise to me.

Then we would go to the firing range and he would load it and I would shoot it. He then would pick me off the ground laughing because it had quite a kick back.

Laugh away big guy-laugh away!

We started to get more guns, and a rifle, and a shotgun.

We had a safety plan to make sure any future children of ours would not have access to any guns in our home and so as the kids came, they knew we had guns but only ever saw them on daddies work belt. They knew they were in the house but had no access to them

Over time, I had learned to take apart, clean and put together and load a gun. I also became a pretty good paper target shot.

One night after hubby went to work, I was watching our baby son breath. Oh come on, we all sit near the crib and watch our little miracle breath right? For me it was a blessing beyond belief because he was HOME.

If you've read this blog for any length of time, our son was a sickly child and spend 6 weeks longer in the hospital than home the first year of his life, so having him home was a big deal.

Anyway, I was watching him breath late at night with only the light from the nightlight plugged in near his crib, when I heard something at the back door. I got up to go look what was making that noise and saw a shadow through the back window. A BIG shadow. It was jiggling the back door!

Without even thinking, I got the gun, loaded it in the dark  and walked back into the kitchen. I didn't want to wake the baby with a loud "bang" so instead I yelled "I have a gun and I WILL shoot". I will admit that the yelling could have woken him as well, but it didn't. The shadow dropped to the ground and I heard hubby's voice say " Yes you can shoot, I taught you".
Hubby had forgotten something at home so came back to get it. He figured I would be sound asleep and he would simply quietly come in, get it and leave. Huh! Simple! Really!

Lessons he learned that night
Moms watch baby's sleep
Moms hear all kinds of noises in the night when home alone
Moms will defend their children ALWAYS
I proved to myself that This girl will shoot a person and will "warn" them first.
I don't like surprises.

I still don't like surprises but hubby would have to learn that lesson again, at least one more time.