Why elope? And Parents Reaction! 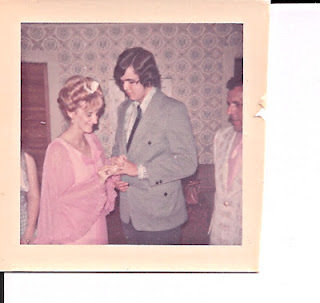 I mentioned last week that hubby and I eloped. We didn't start out planning that step but it's one that I have yet to regret.

When hubby and I were planing our wedding it was in the 70's, a time when many marriages were held on the beach, barefoot...
Or under an arbor in someone's back yard,
With folding chairs...
Or in an open field under the stars,
Wearing wide brim hats
Or a ring of flowers!

We wanted something simple in the back yard with the priest there and a few friends and family.We wanted one person to stand with us and finger snacks afterwards.
We wanted to have music playing from a the record player playing songs that were meaningful to us.

I had to have my sister's wedding.
It was big and showy.
It lasted all day long.
She was sick by time it was over.
I know because I held her dress while she threw up so nothing would land on it.

I had vowed to myself that I was not doing that for anything.
I didn't want my sister's wedding.

Why you ask? Why must I have a copy of her wedding?
Well the dress and shoes and veil were costly and my mom wanted her money's worth and no one would know it was her dress anyway. Plus she still had all the receipts so she knew who to call and wouldn't have to relearn how to plan a wedding.

Again, we told her we did not want a big wedding and urged her to just let us have what we want.
She told us that what we wanted was not nice enough and looked "poor".
However every day I heard about the cost, the time involved, the list of people coming, the cost had gone up a lot in 4 years since my sister's wedding, the time and over and over agin how I was not worthy of such a great wedding.

Finally, we decided that if we were going to break fee from her grip, we better do it right off the bat.

So under the guise of babysitting for my sister, I left the house and went to my sister's house but it was not to babysit!
We gathered my sister, her husband, their child, my future-in-laws, and Hubby's favorite uncle and aunt. They all were told it was going to happen, they were all glad for us.

We gathered at the office of the Justice of the Peace, exchanged vows, and became man and wife.
My future father in law made last minute arrangements at our favorite restaurant for a nice meal. When they heard of the reservation, they made us a wedding cake.
My sister did my hair.

In a total act of rebellion I wore pink! I have told you I'm Scottish right? I thank my dad for that.

So I had the small wedding I wanted. We had the ones that were most important to us there. We had a nice meal and a surprise wedding cake.
My parents were married in a big church wedding-they had a terrible marriage.
My sister had a big church wedding- it dissolved a long time ago, they were miserable.
I kept the promise to myself and didn't have that.
I am glad I stuck to my guns.

After the wedding and before the meal, we stopped by the house to tell my parents.
My mothers first words to us, and I kid you not,
"Why didn't you tell me you wanted something small and easy?"
Cross my heart - true!
And that's one of many reasons why my mother really disliked Hubby and tried to poison him a few years later....but that is yet another story another time!
at 5:30 AM