How to Get Your Kids To Eat Their Veggies!


We have all heard those "Mother-In-Law" stories, right?  A bunch of people get together and in no time you will hear someone say "My Mother-In-Law is so bad...."
Well so far we have been able to top the other stories that we have heard. 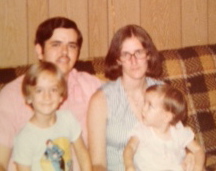 Let me set the stage for you.
The year:  1976
The place:  New Hampshire, my mother's house
The event:  Between base moves.  Husband is in the U.S. Air Force and we are moving from England to Louisiana.
The cast: Hubby, me, two children (ages 5 months and almost 5 years.)....And My Mother.

We were spending a few weeks between bases as we were just coming back from England where we had been for a few years. Our daughter was born over there and no one had seen her yet so instead of going straight to the new base, we decided to head over to New Hampshire for a few weeks to show off our little girl and our big boy.  My mother had offered for us to stay with her and it was the more centrally located home of anyone else's so we took her up on her kindness.

We had become Christians and were really trying to live the words Romans 12:18 "If it is possible, as far as it depends on you, live at peace with everyone." So since she offered we decided it was worth staying with her, after all it was only for a week.

We had visited with my in-laws (who were a gift from God himself to me!) and my sister and her kids (she had 3 by then) and some friends as well.

One night we were finishing up dinner and my mother made some Indian Pudding for dessert. Indian Pudding is a concoction made from cornmeal, molasses, milk, butter, maple syrup, eggs, cinnamon, ginger, and nutmeg. It's considered a true New England tradition.


The baby was too young for it so she got whatever I had for her.  Our son was offered a popcycle instead, and I don't like Indian Pudding, never have.  Hubby was still trying to make peace with this woman so he ate some.  I asked him if he liked it and if he did I would make him some.  He told me that it was fine if I never made it as it was not very good.  It was late so we went to bed.

Sometime in the middle of the night, he was really sick. Throwing up and looking just terrible. I decided we had to go to the hospital and called 911.  We were taken to the local VA hospital where they began to run all sorts of tests on him.  At one point the doctor came to see me and asked where we had eaten dinner thinking we had gone out to some restaurant.  I told him we had eaten at my mothers house and started to tell him what we all ate.  Then I remembered the Indian Pudding and the fact that she didn't eat any. She loved this stuff and would make it often while I was growing up but this night she didn't eat any, saying she was too full.

The doctor told me he had found rat poison in hubby's stomach.  My heart sank, not only was my husband suffering from food poisoning but because of the late hour, I had left the two kids sleeping at my mothers house.  I quickly called my father-in-law and begged him to get over to my mother's house and pick up the kids and then get to the hospital. Without asking questions, they got dressed and got our kids and stuff for them and got to the hospital. I was blessed with the best In-Laws I ever could have wanted. 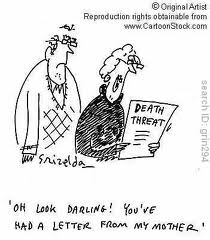 Hubby would be OK but he had been poisoned.  I went to my in-laws home after that and when I returned to my mothers house to collect the things that were left behind, I asked her about it.

Her response was:
"You will be better off as a widow."

We could have pressed charges but hubby didn't want to do that. Remember, we are now Christians and we live by a different set of values.  Plus we are moving to Louisiana and may never see her again.
He tried to convince himself that her eye sight was failing and that the box of cornmeal and the box of rat poison look similar so it was an honest mistake, right?  Only if she had eaten some of it would I ever believe that plus there is her statement to me.

Now we did leave the Air Force in 1980 and return to NH because we had other family up here.  We did go to her home for meals - funny things about her meals - the family only ate what I ate since she wouldn't try to kill me.  This is a great way to get your kids to eat their veggies!!! See how I got the title of the blog into this story.....

Move forward some 16 years. My mother was dying of lung cancer and could no longer care for herself.  She had to live with someone. My hubby said that we had the most room and were closer to her doctor's so she should live with us. I reminded him she is the same woman who poisoned him with Indian Pudding.  Without batting an eye he says,
"Well, she isn't cooking!"
You just gotta love a guy like that! I know, I do!