It was just so nice this weekend.  The sun was out, the temps were in the 60's, I had energy, and the "To Do" list needed to be attacked.

The only thing that could have made it better would have been to have Hubby home with me but he was out of town on a Lectureship, so it was just me and the dogs and we went to work.

Remember last weekend we had a few teens stay with us while they were attending the youth rally?  Well, we did pick up after them but we didn't clean up. So I did that.  I also moved furniture around and opened up the room a bit.  I took one small table we had down there and moved it to the back deck to use as a  table next to the grill. 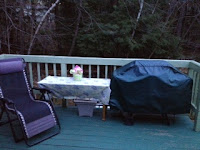 I love the color dark red and love having it around me.  Since I had some red paint still around and it IS possible to paint the counter tops I did so.

Then I went to the back yard and put up August's agility equipment.  He enjoys most of the obstacles (he has had 2 bad experiences on the see-saw so he avoids it now. I have a small one that he is getting use to again. Poor baby.

When Gerry got home and saw all I did, he was surprised and helped me with the arbor that fell down last fall.  It fell during a wind storm, then it froze to the ground, then it got snowed on, then it got snowed on a LOT MORE. Finally it appeared but it was showing signs of wear so Hubby tightened up the screws and we cleaned it up and repainted it black.  Once it dries we will get it back in the ground so that the flowers can climb it again this summer.

It was a great and busy weekend and boy did I need the naps that I took.  How was your weekend?
at 5:00 AM