1. How do you typically react in a sudden, extreme, pressure-filled crisis? Would we want you nearby in an emergency?

Yes, you would want me nearby in an emergency. I stay pretty cool. Several years ago our home was broken into and I was the one that found it. I called the police and called Hubby. Even the police officer commented on how cool I was. Now, after they all left and Hubby was home, I washed all my clothes and started shaking. The thief's had gone through my dresser and the thought of someone touching my undies made my skin crawl.
2. Caramel apple-caramel sundae-caramel corn-caramel macchiato...of the four, which caramel treat would you choose?
Caramel macchiato in my coffee! Low Carb of course.
3. Is there such a thing as destiny? Explain.
Destiny - Do I believe that "Something is out there controlling what happens to me?" Then No. I believe that God is in control and nothing happens that he does not allow to happen.  I may not like it, and I may grumble about it, But He is still in control.


4. What's your favorite piece of furniture? I'm referring to something currently in your possession as opposed to something on your wish list. 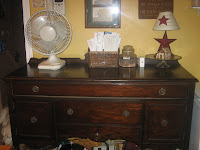 This side board belonged to my Memere (Grandmother). She came to this country from Canada looking for more opportunities for her children. She could not speak English and neither could her children, so she enrolled all her children in "English Only " schools so that they would all learn the language faster. She had her girls educated as well as her sons (at the time, girls didn't continue much past the 4th grade). She believed in education, she believed in the USA and she believed in a better life for anyone who wanted to work for it.  Too bad those beliefs seem to be disappearing.
5. Wednesday night marks the start of the 2011 Baseball World Series. Did you know? Do you care? Will you be watching? Ever been to a professional baseball game? If you're not an American do you find the title 'World Series' annoying or amusing?
Not a Sports fanatic - sorry. That is why this coffee mug is so funny! 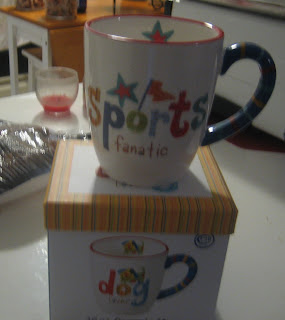 6. A sound that takes me back to my childhood is____________.
Parents telling their children that they are no good, or will never amount to anything. Those harsh words will haunt those children the rest of their lives.
7. On average, once you've linked your hodgepodge post to mine how many other participant blogs do you visit? Do you ever come back to the Hodgepodge later in the day or even the day after to read posts?
I visit about a dozen participant blogs, some early in the morning and the others once I'm home from work.  I do come back the following day to take a peek at a few more.
8. Insert your own random thought here.
Some people had their fireplaces and wood stoves going because I could see the smoke coming out of the chimney and the smell was wonderful. I do love the smell but it means it's cold enough to light those fireplaces and wood stoves.  We have a pellet stove and we have not turned it on yet.....but it will not be long. 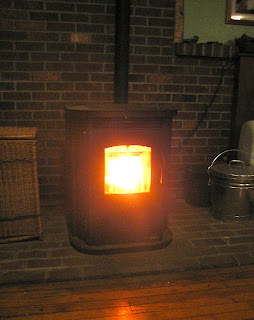