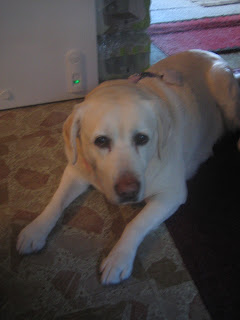 Allowing Ben the choice to end his time with Becke put him in control and that made a HUGE difference. Becke, stayed calm and allowed Ben to just pat her back by her tail. Teaching him how to pat a dog was easy and he followed directions perfectly.  After a few minutes Ben backed up and
Becke walked away. She returned a few seconds later and Ben started patting her again.  Within a few minutes Ben was sitting on the floor with Becke and rubbing her side, then her tummy. He never wanted to pat her face or her head which I was told him was just fine with me and Becke. After all he was in control!  Then he went and sat with his parents. Again Becke walked away - but then the most precious moment happened.

It all took less than 30 minutes and Ben was seeking out Becke to sit with her and pat her. How brave of Ben to take on Becke!  She is 62 pounds and is a big dog after all. Yet Ben wanted to try and he did great!

When it came time for all of them to return to the hotel, Ben told his parents he wanted to stay with us so he could have some Becke time.  By 9:30 it was bed time and here is Ben. 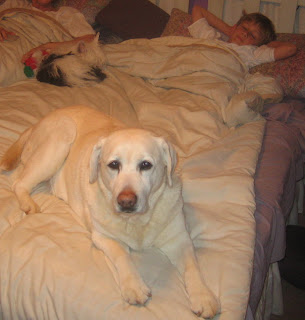 Between Ben's bravery and Becke's magic, he did spend the night with both dogs on the bed with him. And he did great!  He was up at 5:30 with them as well!!!

See why I call my Becke the Wonder Dog?  She just has magic (or is it that she IS magic?)